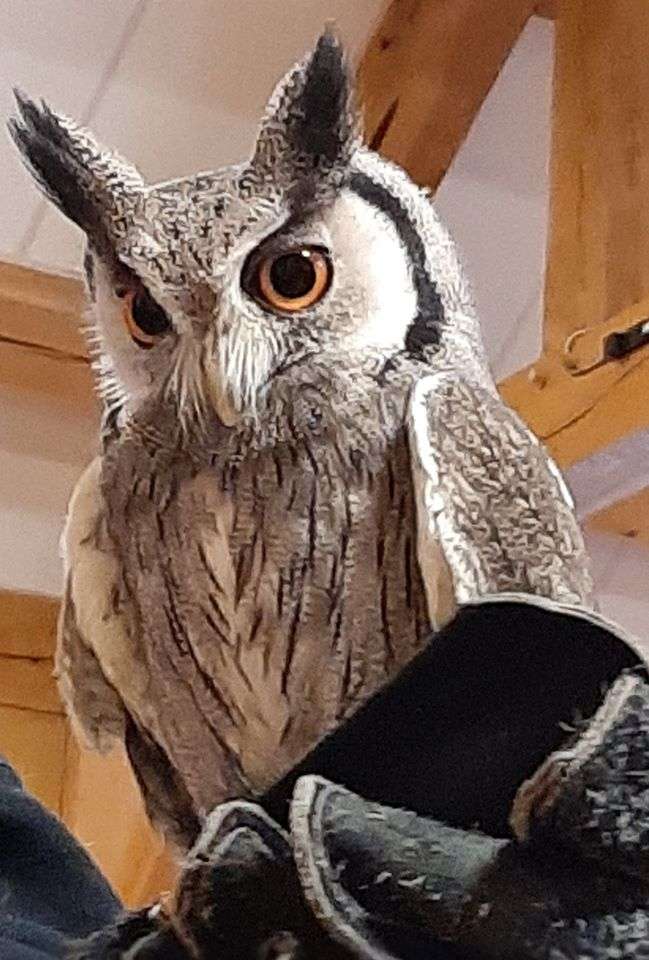 Jane Kelly, local raptor rehabilitator at On the Wing, joined us for our Lunch & Learn on January 16th. Jane, through On the Wing, is dedicated to building awareness of raptors, through rehabilitation, educational programs and falconry. Jane and her assistant, Bethani Garland, shared several species of non-releasable raptors Jane has in her care due to different circumstances.

Jane has quite a following of individuals and families who attend every public program she does to meet and photograph her with her raptor ambassadors.  With standing room only in the Hugh Greg Coastal Conservation Center, Jane debuted a new addition to her education crew, Magoo, a white-faced scops owl. These owls are native to Africa, and Magoo came to Jane from a captive breeding program where he imprinted on humans. This tiny little owl with piercing orange eyes mesmerized the crowd.

Magoo joined several other raptors in the program, including a Great-horned owl, a red-shouldered hawk, a merlin and a saw-whet owl. Jane cares for many more ambassadors at her home, including an African pied crow, a snowy owl, a Eurasian Eagle Owl, a turkey vulture, screech owls and more. These are in addition to the many raptors that Jane is rehabilitating with hopes of releasing them back into the wild.

If you would like to find out more about On the Wing programming or when and where Jane will do her next release of a rehabilitated raptor, go to her website onthewing.com or visit her facebook page On the Wing.