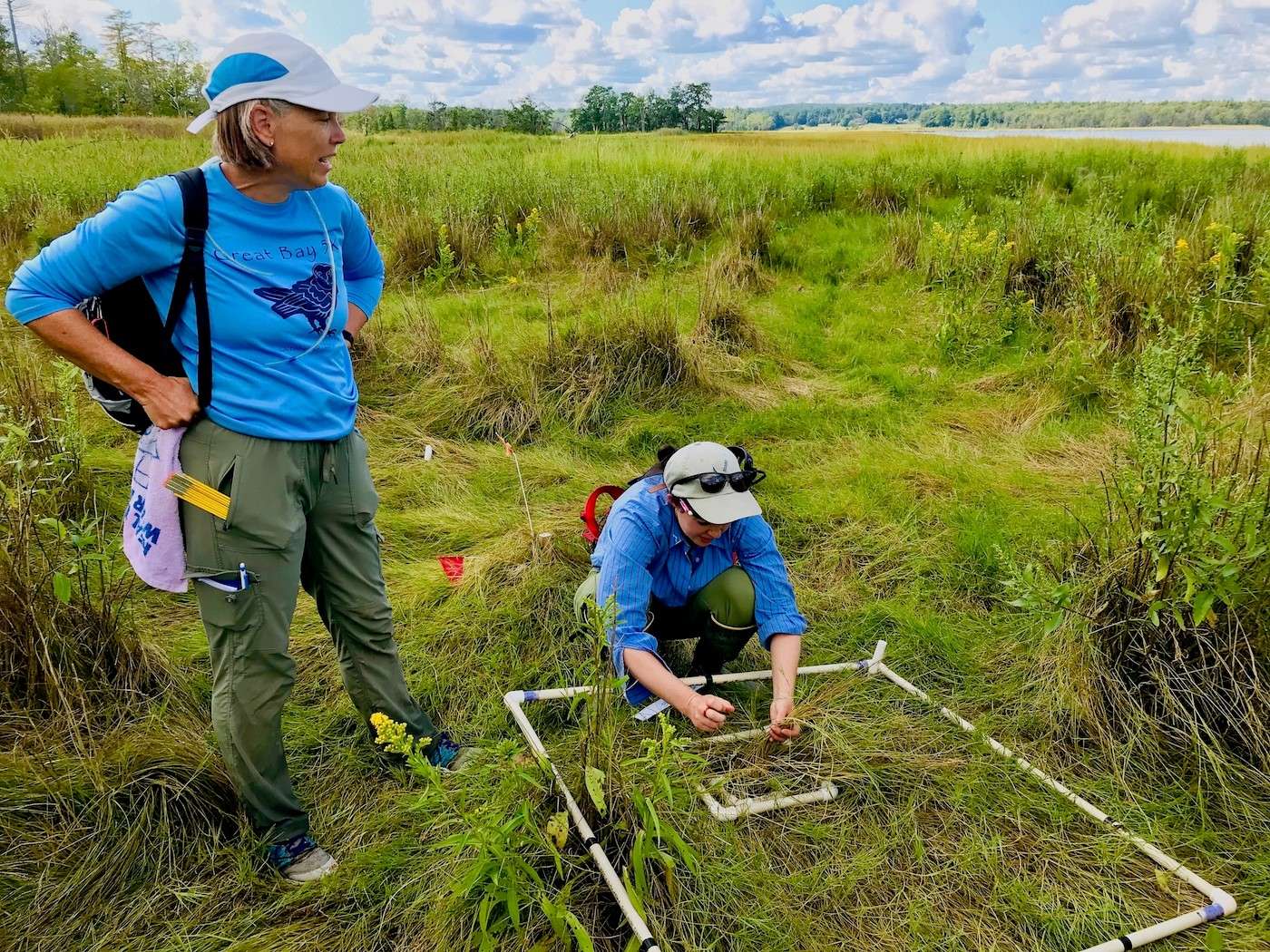 Oceans are rising at an alarming rate with future predictions almost impossible to comprehend, let alone plan for. Rising seas have and will further impact coastal communities in multiple ways, including flooding to homes and businesses and salt infiltration into our drinking water, but also can have large impacts on natural ecosystems. Salt marshes, in particular, are at great risk of ‘drowning’ from sea-level-rise. These saline grasslands naturally build with rising seas by trapping sediments from the tides and through adding a matrix of roots and rhizomes to the soil, also referred to as peat, but may not be able to keep pace. Coincidentally, the building of peat is also the main mechanism of carbon storage in marshes, which along with other coastal wetlands (mangroves and seagrasses) account for more carbon sequestration than any other ecosystem in the world. If these valuable coastal marshes are further diminished, you can imagine how this could amplify carbon dioxide levels in our atmosphere, further warming the planet and increasing sea levels.

Over the past decade, scientists have been tracking the effects of rapidly rising oceans on salt marshes. Great Bay National Estuarine Research Reserve, along with many of the other 28 Reserves around the country, began monitoring impacts to salt marshes since 2010. This wealth of data along with increasing concern over the persistence of our marshes led the Great Bay Reserve and David Burdick- a Research Professor at the University of New Hampshire who has been studying marshes for several decades, to ponder what the data was reporting. Have salt marshes been able to keep pace with rising seas? Are we seeing differences in marsh response across New England?

From these concerns and our long-term monitoring, a project was born examining salt marsh trends at Great Bay and other nearby Reserves, ranging from Rhode Island to Maine. Our team, which included researchers and collaborators from all four New England Reserves primarily focused our research on how plant communities are responding to rising seas over the past decade. We employed tiers of increasing complexity to analyze potential change in plants using graphical visualizations, univariate and multivariate statistics, and inundation modeling. In all cases, significant trends were found showing salt marshes have been shifting throughout New England indicating greater flooding and overall a wetter environment. (graph and time series are also shown in larger size at the bottom) 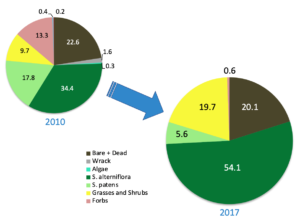 Time-series tracking a single plot in the low marsh at Narragansett Bay, RI showing a drastic loss of plants in only 5 years.

Southern New England marshes in Rhode Island and on Cape Cod, Massachusetts, have experienced the most dramatic changes in marsh plants. Our team suspects southern marshes are more sensitive to rising seas, not because of their latitude, but because of their relatively small tidal ranges. If a marsh has only a couple feet of tidal water fluctuation, then an increase in water levels is proportional much larger compared to marshes with over 10 feet of tidal range. Data from our northern marshes in Maine and New Hampshire support this hypothesis, by showing less dramatic changes to the plant communities and exhibiting tidal ranges over twice as large as southern marshes.

This study is a first, using on-the-ground monitoring across New England, to show the vulnerability of salt marshes to sea level rise in both microtidal (more vulnerable) and mesotidal (less vulnerable) estuaries. Our results serve as a call to action by coastal resource managers and decision makers, especially those who might be uncertain whether marshes are truly at risk. In anticipation of much greater salt marsh loss in the near future, managers should consider helping these systems cope with unprecedented increases in sea levels. Some tools at their disposal include experimental restoration within the marsh, including boosting elevation with thin layers of sediment applied directly to the marsh or reducing the number of historical ditches that prevents marshes from building naturally. Other tools may be aimed at allowing salt marshes to naturally migrate landward into what is now upland areas, by removing barriers and protecting these lands. Overall, our results highlight how salt marshes are being transformed and lost, and provide a strong case for continued monitoring, research, and management to prevent further loss. 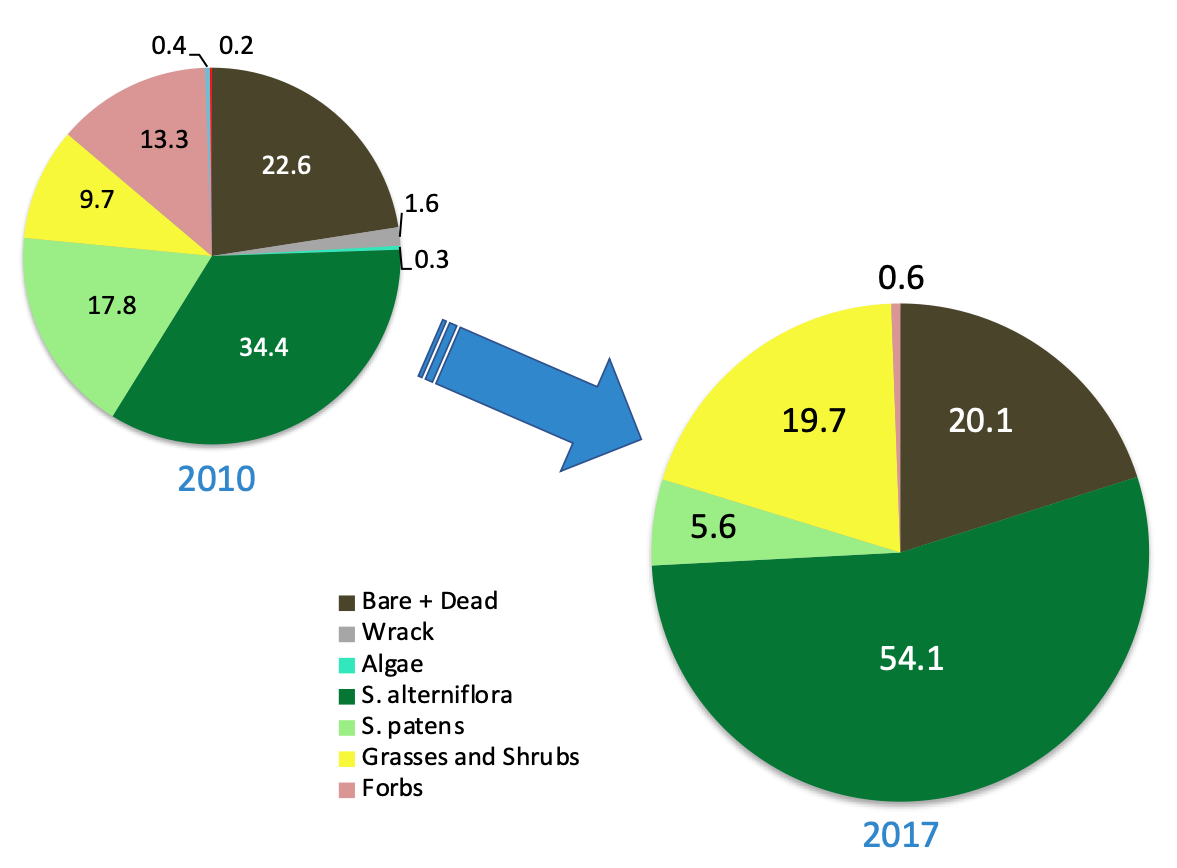