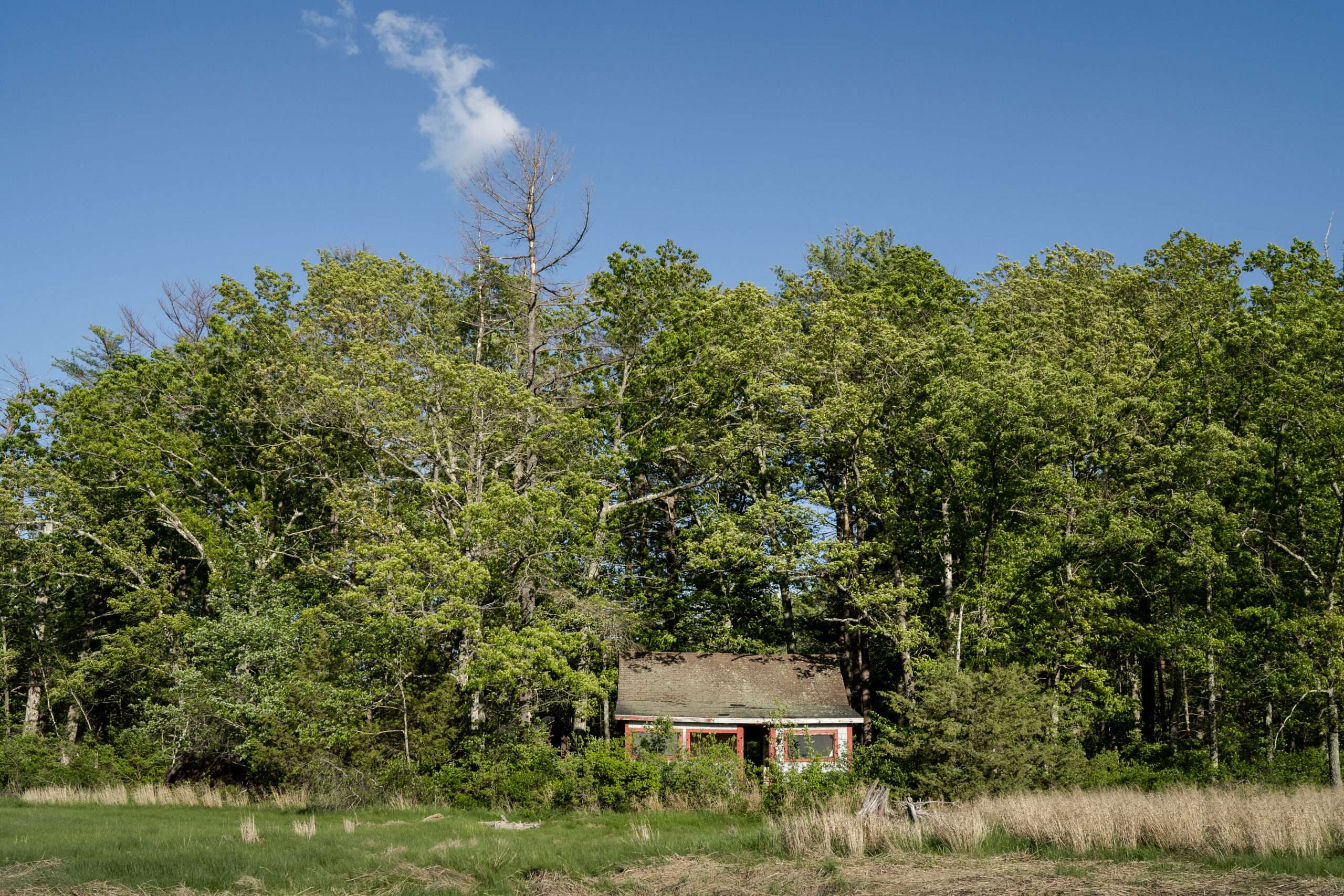 In the first quarter of the 20th century, the number of farms around New Hampshire and the Seacoast began to decline.  In response, many farmers diversified their agricultural activities to take advantage of a growing statewide tourist industry.   The state of New Hampshire promoted a program to attract summer visitors in an attempt to offset the decline of agriculture that was taking place in most parts of the state.  Promotion of tourism was done by both the state government and private individuals.
Farmers with substantial tracts of land around Great Bay began building cabins to attract tourists to the region. By the turn of the century, several local farmhouses had been converted to boardinghouses rented specifically to vacationers, and clusters of summer camps began to appear along the shorelines on former farmland.    Families were met at railroad stations around Great Bay, such as the Stratham Depot, and were transported by horse and carriage out to their rented cabins.
Two tourist camps on the shores of Great Bay owned by Jonathan Brackett and Richard Weeks flourished in the summer season.  Both the Brackett and Weeks families provided organized activities such as hayrides, horseshoe contests, soft ball games and hot dog roasts.  Family members baked beans and pies to give to the campers and locals would join in the festivities with the renters.  To rent a cabin would cost you $7.00 to $10.00 a week.
Over time these cabins were sold into private ownership and they evolved into “sportsmen or woodsmen’s cabins. The evolution to sportsmen’s cabins happened gradually as farmers would lease out spots for waterfowl hunting and duck blinds. Soon small shacks were built behind the duck blinds and local farmers moved small outbuildings to the shore.  The buildings were often no longer used for their farms and included chicken coops, woodsheds and early dairy buildings. A second wave of cabin construction ramped up in the late 1920’s to early 1940s, just like the Parker Cabin, a small unassuming structure at the mouth of the Squamscott River in Stratham.
In the early 1930’s, Albert Parker, a locomotive engineer for B & M Railroad, built a sportsmen’s cabin along the Squamscott River in Stratham. Perhaps Parker was drawn to the scenic location near Stratham Depot after viewing it from the train trestle that crossed the river less than a half mile to the north. Parker and his wife Effie lived in Portsmouth and the cabin would have been an easy drive in the family car.
The Parkers purchased the land from George and Ada Dunton who occupied the Kenniston Tavern farm at the corner of Rt. 33 and Depot Road, a farm that once included 85 acres and extended from Portsmouth Avenue to the river. The small waterfront lot the Parkers bought was accessed by way of a pasture lane behind the barn.
Built during the Great Depression, the Parkers’ rustic seasonal cabin was set on wooden posts and originally clad in novelty wood siding. It measured just 20’ x 16’ with one open room on the first floor and an unfinished loft above. There was no electricity or plumbing. A woodstove or gas stove initially provided heat and later propane gas fueled the stove, heater and lights. An outhouse was located a short distance away. A wide porch with awning windows facing the marsh offered optimal views of beautiful Great Bay.
The Parkers owned the property for twenty years. Like other sportsmen’s cabins, it was likely used in the summer for swimming, fishing and boating, and into the fall for waterfowl hunting. In the winter when the rivers and bay froze, hearty anglers probably gathered and used the cabin as a cozy “base camp” for smelt fishing.  Most of the recreational cabins along Great Bay were privately owned and not rented.
In 2013, the Reserve acquired the land the Parker cabin sits on as part of its conservation efforts.  Knowing that it was in heavy disrepair and attractive to potential vandalism, the process for its removal began.  A group of historians and conservation agencies convened and it was determined a recreation of the Parker cabin in the Special Collections Room at the Great Bay Discovery Center would be the best way to honor both the cabin and all the cabins that once flourished throughout the Great Bay Estuary.  Once the Center opens again, visit the Collection and view a replica of the front porch, its view, and many real items from the cabin such as old gas lights, eeling pole, kitchen accessories and furniture.
-Kelle Loughlin, Education Coordinator 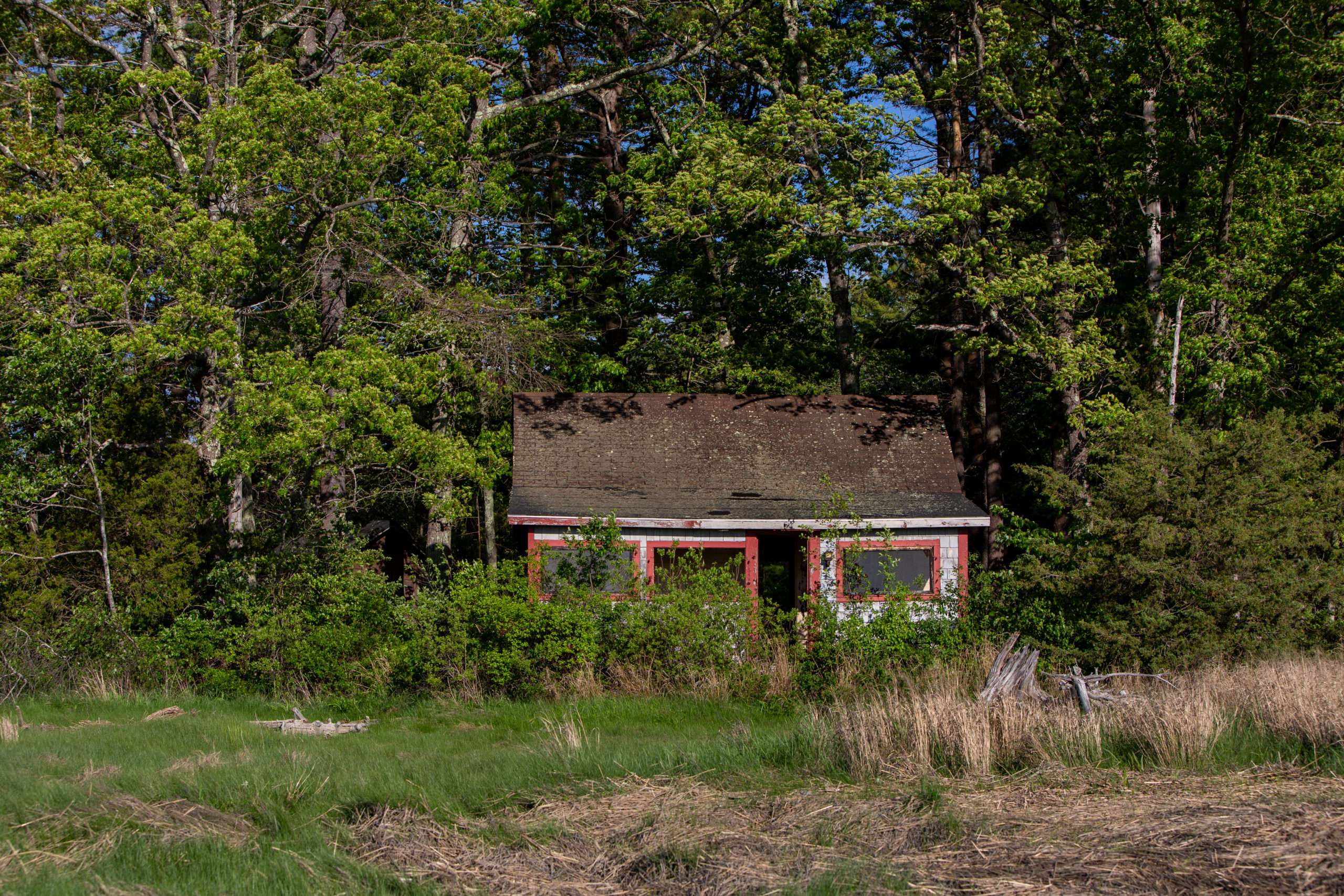 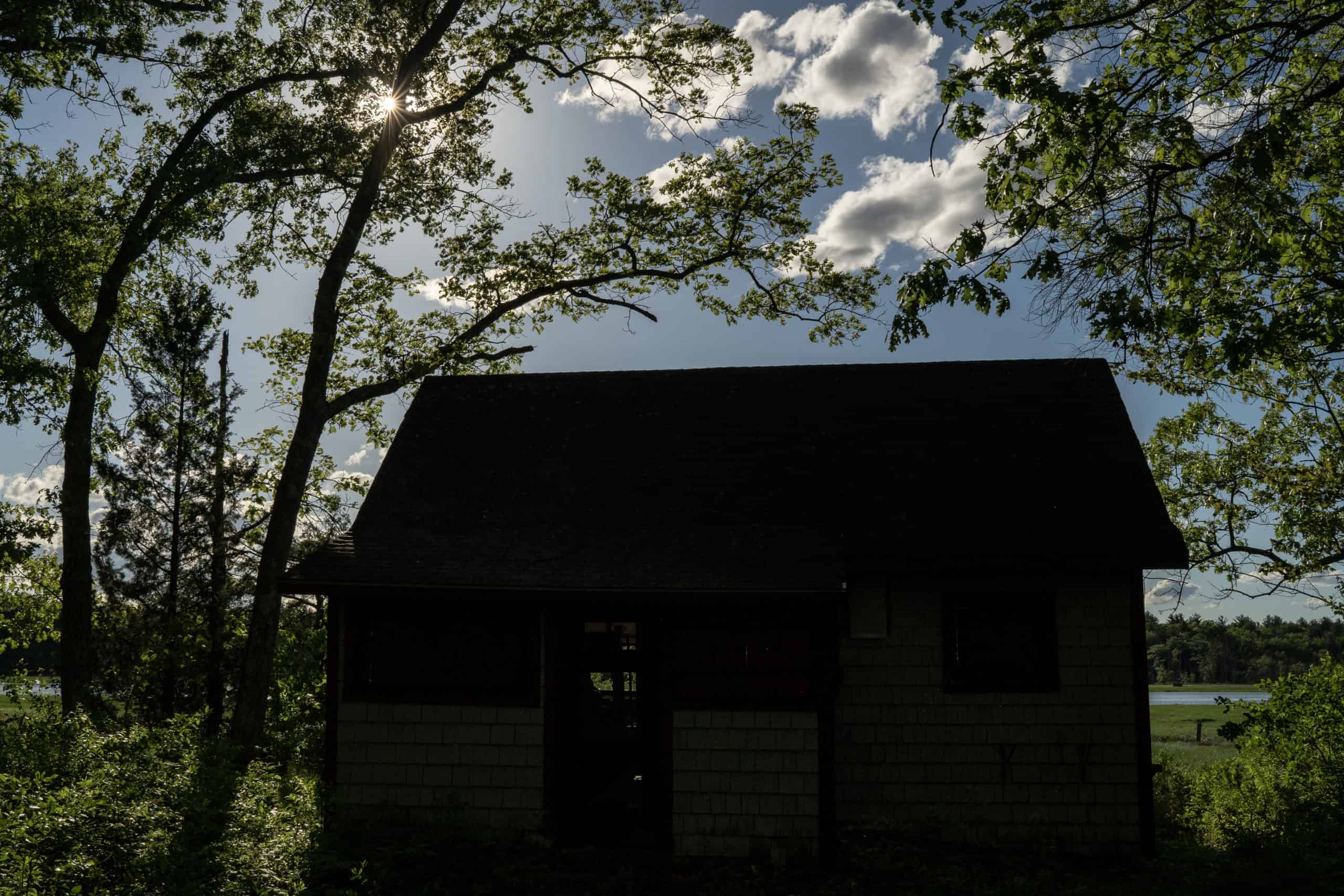 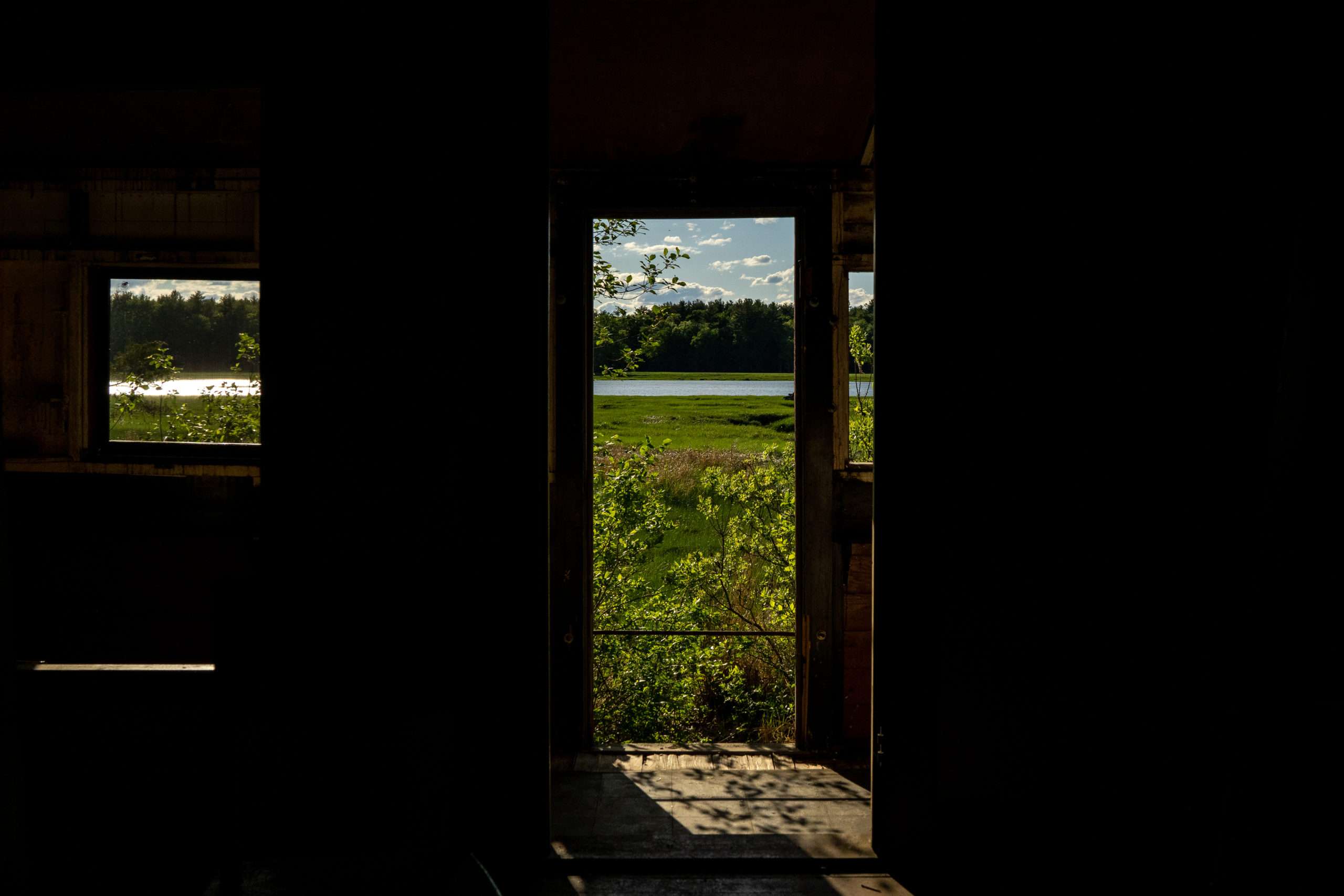 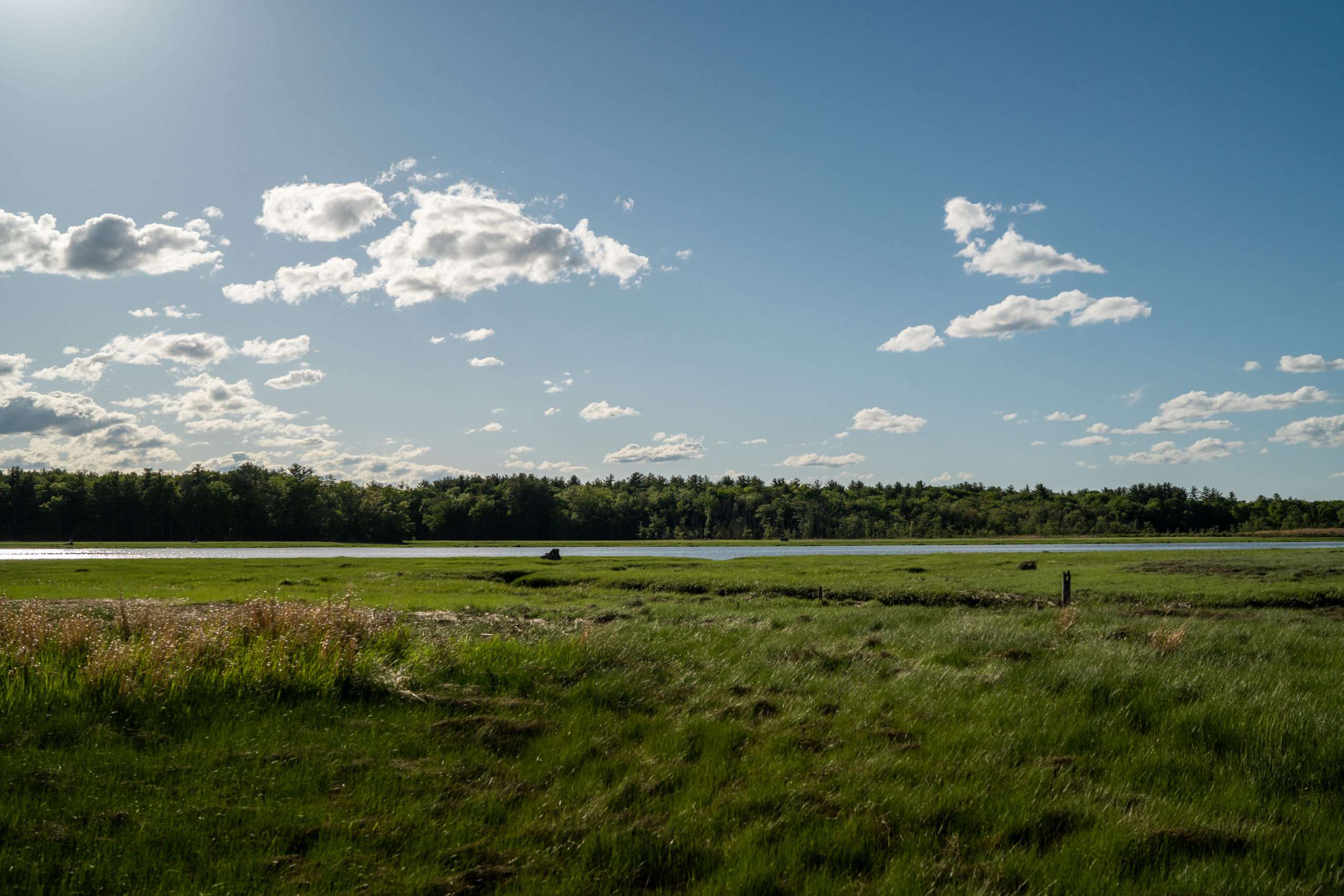 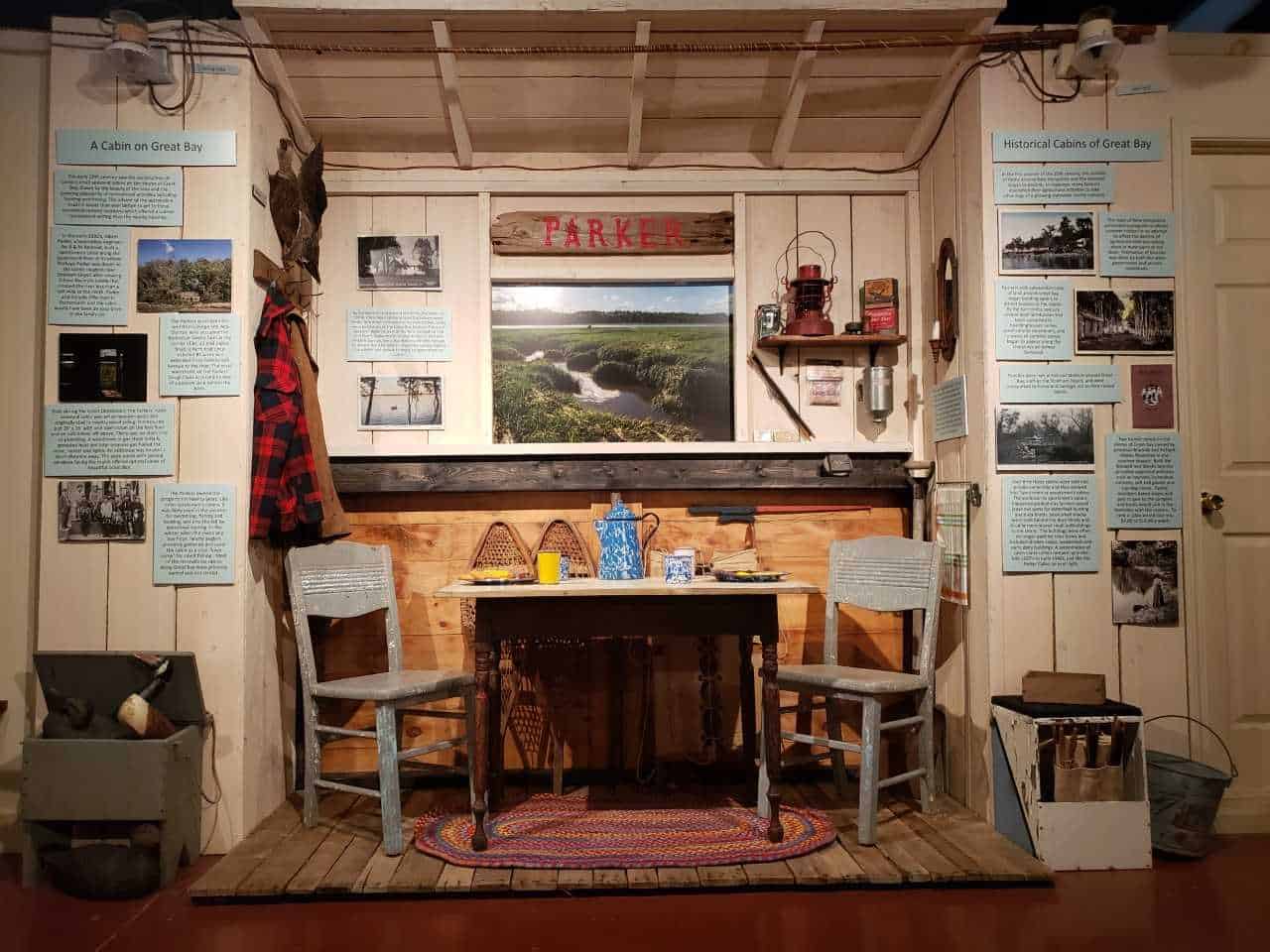 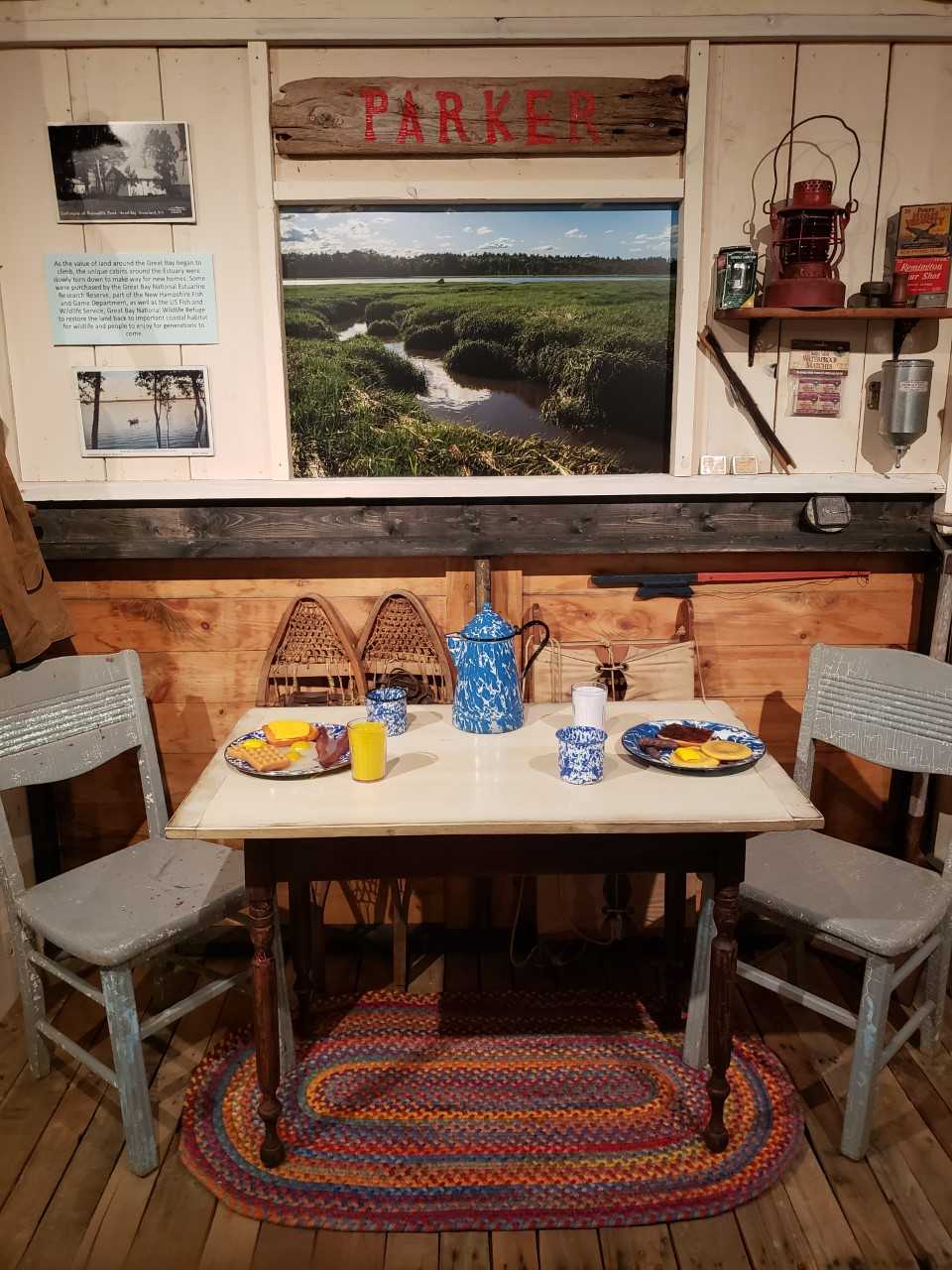